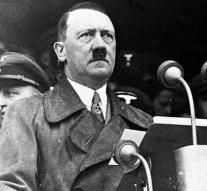 devizes - At an auction in England, a notebook that belonged to Adolf Hitler auctioned for 33,000 pounds (37,200 euros). According to British media, about 200 handwritten telephone numbers are listed in the booklet.

According to the owner who offered it for sale, the booklet was found by a British army captain in a chest of drawers in the central chancellor's office in Berlin in 1945 after the surrender of Germany.

In February of this year, the red phone Hitler used in his bunker during the Second World War was sold at an auction for 228,000 euros.