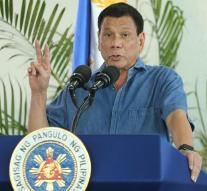 - The Philippines will not break its trade and economic ties with the United States. That said, the Philippine Trade Minister Ramon Lopez Friday. A day earlier announced President Rodrigo Duterte to any separation of Washington.

'The president was not talking about a separation in the economic sense. We stop trade with the US is not. 'Lopez said this to CNN during a visit to Japan where he and Duterte.

The president wanted to 'separate' from the United States. 'I do not go to America, because we only get offended. '

The US State Department, which prides itself on good relations with the people of the Philippines, the comments of Duterte called 'baffling' and wanted to know what the new president meant by his 'separation from the US '

A spokesman for President Duterte said Friday that one should refrain from drawing conclusions until given further explanation by Duterte himself. 'There is no urgency for us to interpret the speech of the president. We must wait for further explanation of his own. '