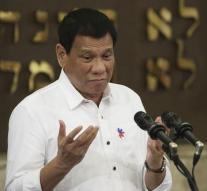 - Following his brutal fight against drugs will also eliminate smoking Philippine President Rodrigo Duterte. Soon he put his signature under a law that prohibits smoking entirely in public space, made his health minister Monday. ' In parks, bus stations and even in cars will no longer smoked, '' said the minister.

Duterte has become notorious in a short time by his drug use in his country fights with brute force. Since taking office last summer, more than 3,600 alleged drug dealers, users and passers-by killed by policemen and civilians who took the law into their own hands after calls from the head of state.

How strict smoking ban will be enforced remains to be seen. The sale of tobacco use and also remains permitted indoors. According to the Minister Duterte will sign this month the new law.