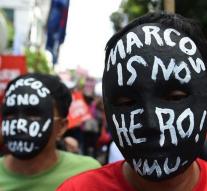 - The Philippine dictator Ferdinand Marcos (1917-1989) may be added by the Supreme Court in Manila at the war cemetery, the National Hero Bury Put these.

The court rejected the majority (nine votes to five) complaints from, among others, human rights activists. President Rodrigo Duterte ordered the burial of Marcos. The remains of the ruler can be transferred fled in 1986 after a popular uprising to the cemetery in a southern suburb of Manila. The Supreme Court ruled that Duterte has every right to do so, The Philippine Inquirer reported Tuesday.

Marcos was elected president and ruled from 1965 until his flight to Hawaii. He ruled from 1972 dictatorial. After his death, the body is frozen. His widow Imelda Marcos in 1993 received permission to transfer the body to the Philippines. It lies in a mausoleum in Batac, nearly 400 kilometers north of Manila. The now 87-year-old Imelda campaigning to fulfill the wish of her husband to get a final resting place on the hero cemetery with military honors.