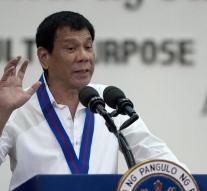 - Philippine President Rodrigo Duterte has threatened to leave the United Nations. Who had called for an end to the wave of deadly force against suspected drug criminals in the Southeast Asian country.

That was against the wishes of the president. Duterte showed Sunday know might want to leave the United Nations to form a new organization together with China and African countries.

Human rights experts from the UN want Duterte stop extrajudicial executions and murders. Since his election victory in May, killed about 900 people.


Duterte called during his election campaign to the murder of drug dealers and users. Friday he denied that the government is responsible for the violence.