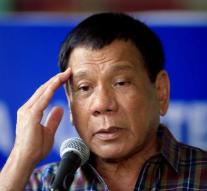 manila - The Filipino army arrested Mohammed Maute on Thursday. He is one of the brothers of the leaders of the jihadist Maute group who runs a bloody battle with the army on the island of Mindanao. According to a military spokesman, he was arrested at a checkpoint at the coastal town of Cagayan de Oro.

Two brothers of Mohammed, Abdullah and Omar Maute, lead the group named after them. The three-year-old movement would consist of jihadists from other Islamic Islamic movements on the island, supplemented with foreigners. In 2015, the Maute group called for 'subsidiary' of IS.

The jihadists have been in possession of a part of the Philippine city of Marawi for a few weeks and use stolen weapons and ammunition to stand there. Cagayan de Oro is located about 100 kilometers north of Marawi.