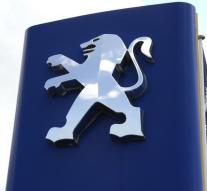 rotterdam - Car importer Peugeot has bought further prosecution for two million euros for bribing a Defense Officer. This was announced by the National Office of the Public Prosecutor that the case was under investigation. The car company was 'to management' involved in bribery, says the OM.

The officer was under more fleet manager at the Ministry. The prosecution alleges that the Peugeot man because of his position and the position for having unlawful gifts and perks such as cheap leasing of cars and invite him also on foreign trips. Employees of Peugeot did on behalf of the company, the investigation revealed. The gifts to the fleet manager walked up to over 60 000.

The bribery took place between 2001 and 2012. The current Peugeot management has been completely renounced and cooperated with the investigation, the public prosecutor announced.

The transaction with Peugeot is part of a major investigation into corruption in the fleet or the procurement of official vehicles for the police and defense. The Department also started in March 2012 study, which resulted in a criminal case against police and defense officials and a number of car companies. Last year, the public prosecutor announced that two police officers and four officials of Defence prosecuted for corruption.