Home / World / Petry goes all the way out AfD 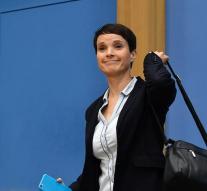 dresden - Party chairman Frauke Petry announced her departure from the right-populated party Alternative für Deutschland (AfD). 'It's clear that this step must follow,' she said in Dresden on Tuesday.

Petry was chosen last Sunday on behalf of the AFD directly in the Bundestag, the German Lower House, but she left Monday not to take part in the AFD group.

Petry is now co-chair of the AfD, together with Jörg Meuthen. Between the two, according to German media, it is no longer personal at the personal level. Petry also returns as a group chairman of the AFD in the state of Saxony.

During the Bundestag elections, the AFD won 12.6 percent of the votes. The party comes for the first time in the federal parliament. With 93 seats, she is the second largest group.