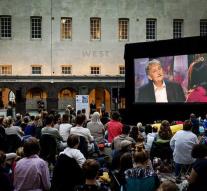 amsterdam - In no more than 24 hours, twenty thousand people have signed the petition to name the bridge over the IJ to mayor Eberhard van der Laan. The mayor of Amsterdam is incurably ill, but who saw him at sundowners last Sunday evening admired his lifetime pleasure. 'I hope to be your mayor for a while.' He made such an impression that a group of townspeople launched an online petition to link Van der Laan's name to the future bridge over the IJ.

The naming of the bridge, however, is not possible. Such an initiative may only take place if a person in question has been deceased for at least five years. Whether it is a (living) member of the Royal House. 'We ask for our mayor an equal exception', read on the website of the petition.

Earlier this month, the Amsterdam Council agreed with the construction of a new bridge over the IJ to connect Amsterdam North and the Center. It is not a hundred percent sure that this bridge is coming because there is great resistance from national politics. Traffic Minister Schultz would prefer to see a tunnel appear in that place. It does not prevent the Amsterdammers group from turning off the petition.

Van der Laan made a lot of impression with his performance in Zomergasten. The broadcast drew almost a million viewers. They witnessed a mayor who refused himself against the inevitable. The lung cancer is sown and incurable. 'But I plan to stay your mayor for a while. '

How serious it is with him did not get quite clear. Then comes his own statement: 'I have something wrong. That death is near is stuck. But I belong to the group who does not think about it. '

Van der Laan broke in the last quarter. When he showed the images of Ajacied Nouri, he did not keep it dry. Particularly the intergeneration between groups such as the F-side and Moroccans struck him. 'This is what a mayor wants. '

The petitioners conclude: 'Van der Laan is, by word and deed, a bridge builder. In recent years he has shown how a politician can and must connect. '