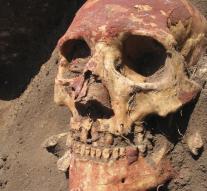 copenhagen - The plague seems to be much older than previously thought. Investigation of 101 skeletons brought in seven cases traces of the disease to the Bronze Age ( 3000-800 BC. ) To light.

In the teeth DNA was found to contain the bacterial infection which caused the disease. The oldest evidence is 5783 years old. That is 2000 years older than was previously assumed, according to researchers from the University of Copenhagen.

The scientists also found that cases of bubonic plague, which was transmitted by fleas, which from ancient bacteria had not yet emerged. That must have happened later, probably around 1000 v. Chr. The investigation remains came from various areas, from Western Europe to Central Asia.