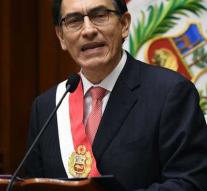 lima - The Peruvian parliament has accepted the resignation of President Pedro Pablo Kuczynski. His successor Martin Vizcarra completed the oath of office later in the day.

Kuczynski announced his departure this week. That happened after a riot about recruting votes. Recordings would show that allies of the president tried to 'buy' political support by offering reciprocal services. This put the position of the president under even more pressure.

Kuczynski stated that there was an attempt to discredit him, but he nevertheless resigned. He said that in his own country's interests. Vice President Vizcarra returned Friday from Canada, where he was also the ambassador. He promised to deal with corruption after his swearing in.

Not all Peruvians are satisfied with the arrival of a new president. Thousands of demonstrators took to the streets shortly before the arrival of Vizcarra in capital Lima to demand new elections. They chanted slogans like 'throw them all out. '