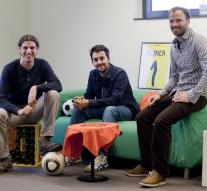 amsterdam - Data is in football is very important. Each match will be discussed afterwards. What went well and, perhaps more importantly, what went wrong and how it can be prevented in the future?

For years, the discussion proceeds on the basis of video recordings. Football analyst of the club looks back to the game and manually select images as learning experience for players. Smart algorithms to support him by automatically selecting certain images. Often, these data very general.

Amsterdam Metrica Sports distinguishes itself from competing companies by tuning the algorithms to the wishes of the coach. It builds upon the request of the coach

'As a coach training specific movements, he can see our data whether it actually works in the game,' says Ruben Saavedra who started the company in 2014 with Bruno and Enzo Dagnino Angilletta.

In addition to custom algorithms, the software also includes standard information such as the number of sprints players have learned and how often the ball is played over a distance of more than 20 meters to a teammate.\n  \n  \n   advertisement

Saavedra and Dagnino know each other from their study neuroscience in Amsterdam. 'We were there a lot of busy tracking movements. Angilletta we knew football, came up with the idea to apply this in football dates. '

The data analysis that has already been done on video, was, according to the three useless for clubs. 'Data on the amount of possession and total distance run, is only interesting for media. '

At this moment Villarreal CF and FC Barcelona use of the analysis of Metrica Sports. Saavedra expects the number is growing rapidly. The company also looks to use in other sports such as basketball and rugby.