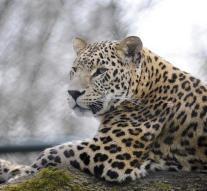 Sochi (Reuters)- After a century of absence walk again Persian leopards in the Russian Caucasus. They are plotted in a nature reserve north of the city of Sochi. Victoria, Agun and Killi come from a special breeding center in Sochi National Park.

The animals have reached reproductive age and should ensure that a new population occurs Persian leopards in the area, as late as the World Wildlife Fund (WWF) know Friday. at least fifty animals for a stable population, according to the director of WWF Russia needed.


Until the beginning of the twentieth century these rare leopard species was still all over the Caucasus. By human activities, the animal disappeared from the mountainous part of the area. The reintroduction worked for ten years by the WWF and Russian scientists.

Globally, more than a thousand Persian leopards. However, populations are small and fragmented to come. The only large population lives in Iran, between 550 and 850 animals.