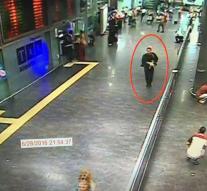 - The three men on Tuesday dozens of people killed in a suicide attack on the Turkish Atatürk Airport, ran with a smile on their face to safeguarding the international terminal. This can be seen in a photograph published on the website.

With thick coats on the trio runs Tuesday airport, as can be seen in the picture (click here), which popped up over Turkish media. So while that night was nearly 23 degrees in Istanbul. With a big smile on their face and- as will be seen later- explosives on their bodies. Authorities have not confirmed that the three men in the picture are the bombers.

Wednesday was via Daily Mailal a photograph of one of the three perpetrators dispersed. On a so-called still images from security cameras we probably pretty recognizable one of the three bombers show, said Turkish media. Interestingly, the man walking around in a so-called 'puffa jacket, a winter coat that bears the offender in midsummer.