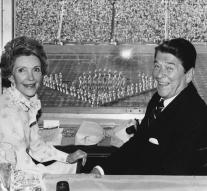 - The man who tried to murder US President Ronald Reagan (1911-2004) in March 1981, will be released next month after 35 years free. A judge in Washington Wednesday that given the now 61-year-old John Hinckley to be released from a facility for psychiatric patients, because he's sane. He will live in the state of Virginia, south of Washington, US media reported.

Hinckley shot at the end of March 1981 the Republican president Reagan for the Hilton hotel in the US capital Washington. Reagan was hit in the chest but survived the attack after an operation in hospital. Three others were injured. Hinckley was found not guilty but was declared insane.

Reagan was at the time of the attack than three months president yet. He remained at that post until 1989.