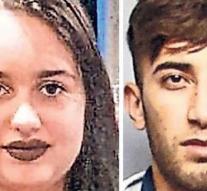 wiesbaden - The Iraqi prime suspect of the murder of fourteen-year-old Susanna F. in Germany, according to several media. The 20-year-old suspect, Ali Bashar, had come to Germany as a refugee and fled from Germany to Iraq last week because he came into the picture as a murder suspect.

The man was arrested in the night of Thursday on Friday not far from the Turkish border in a hotel in Zakho in the autonomous Kurdish northern Iraq. A senior police officer said there that Ali Bashar has made a confession. He would have befriended Susanna, but would have gotten a fight. When she wanted to call the police, he strangled her. Susanna disappeared on 22 May and her body was found on Wednesday.

Ali Bashar is expected to arrive in Frankfurt on Saturday evening. The murder has led to great indignation in Germany and also to political actions with the refugee policy as an effort. In the coming days, several groups will take to the streets in Mainz, the former residence of the victim.