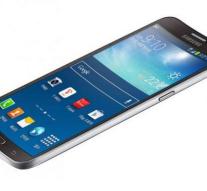 - Samsung may stop imparting the release of Galaxy S smartphones with a 'normal' flat screen, this line only a curved display. Then hint Samsung, at least according to The Korea Herald.

CEO Koh Dong-jin would have indicated during an interview in New York that Samsung has planned to make the Edge screen until the identity of the Galaxy S smartphone line. That could if the company is able consumers 'to offer a differentiated user experience' using software and user-friendly features for curved display.

Last week, the Galaxy Note 7 was presented the new Samsung phablet with a curved edge screen. According to The Korea Herald is obvious that it will serve as a touchstone for Samsung for the decision on the deployment of a single model, with curved screen for future flagship of Samsung. This applies for instance to the Galaxy S8, which will be released next year.


The Galaxy S line from Samsung has since 2015 also an Edge variant. The S6 and S7, there was also an Edge version. The Note 7 was meanwhile without 'Edge' launched in the name, although it does have a curved display.