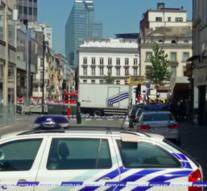 brussels - Police in Brussels came Wednesday after a terror alert in action when a suspicious man wearing a winter jacket with wires hanging out was spotted in the center. A special unit went into action. But the suspect appeared to be a student doing a research on radiation. The police were quite angry and now sends a peppery account.

The University of Ghent and its Iranian graduate student running on the scale intervention at the Monnaie. The police wasted hours of their own services, federal colleagues and the bomb squad to calculate. For that settlement, the court is turned on, police said.

It is not the first time that the police nervous for nothing pluck. A surprised film crew recently received an intervention team behind him when a thrilling scene was filmed without the police knew.