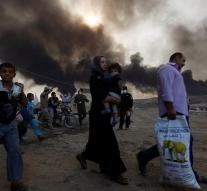 - About a thousand people south of the Iraqi city of Mosul in a hospital ended with respiratory problems. The health problems associated with a sulfur factory presumably fired by terrorist group Islamic State. To our knowledge, no one died.

Factory flew earlier this week on fire, after the Iraqi army IS fighters had pushed back around. According to the US military, the IS fighters factory burned down.

The Iraqi army began last weekend on an offensive to dislodge IS from Mosul. The city is the main stronghold of the terrorist movement in Iraq.