Home / Tech / People picked up for leak Game of Thrones 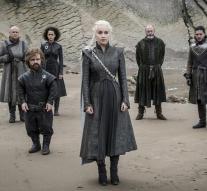 - In India, four people were arrested because they launched a game of Game of Thrones online this month before it was broadcast.

According to the BBC, three out of four suspects work for a company that saves series for a streaming service. That way, they had access to episodes that had not been broadcast. The fourth suspect is an old colleague.

There would be no connection with a large theft of data from HBO. Hackers steel around the same time about 1.5 terabytes of data, including unpublished episodes of Ballers, Room 104 and the new Barry series. They claimed millions of ransom.