Home / World / People do not repel 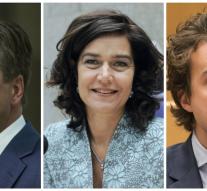 amsterdam - President of the Lower House Anouchka van Miltenburg want people to identify with what is said in the House , but they may also not be divested. " I want to navigate between ," she said in WNL on Sunday.

Wednesday Van Miltenburg too early to MPs not to use swear words more . This happened after Green MP Jesse Klaver PVV leader Geert Wilders had called a nepdemocraat.

Clover responded to the cry "nepparlement" that Wilders had taken earlier in the mouth. Wilders also called D66 leader Pechtold a fat zero. SGP leader Kees van der Staaij said Chamber President stricter must act . " I want to make sure that people want to see the ", Van Miltenburg said of the parliamentary debates .

" However, people should be able to hear in the parliament which they find themselves. " She said there are most annoyed that it always deals with the language and less about the content of the debate.