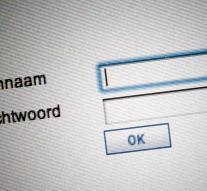 amsterdam - People are not so good on the internet as they think. That says internet security officer, Symantec. We're going to casually with our devices and our data. When our children like we do take action, but we do not know well what to do and how.

According to Kay Clybouw Symantec people give themselves a 10 or even a 10- plus. " However, if we look at their real knowledge of the things they do, they do not follow some basic principles. " One of their mistakes : use the same password for email and Facebook and Twitter and Instagram. " If there is one place is an offense, people who use right to enter everywhere. "

What it comes down to : " All security starts with you. Some people have their password stuck to the bottom of the keyboard. A hacked TV station had left hanging in picture notes with the login codes. There is nothing to file. "

Clybouw is critical of adolescents and young adults. They face more often than others with cybercrime. That's because they are so accustomed to smartphones and technology that they loosely interact with their devices and their data. They share their logins with others, have weak passwords and do not act when they get hurt. " Smartphones are their lives. How we used to talk off when we did not have a smartphone ? You missed each other if you do not arrive on time. Now you do not all. We are easier. To easy. "

Symantec had 2.5 million Dutch to last year with cybercrime. This costs society 1.1 billion.

Four in five parents are afraid that their children will be the victims of malicious intent. Yet we do little against it, also in comparison with other countries. Worldwide, put half of the parents aware of the little children on social media. In the Netherlands, 36 per cent do so. Dutch parents also do not like to block websites, check the browser history or put the computer down in a common area, such as the living room, so they can keep their children watched. Clybouw : " People do not really know how to approach it, what the right course of action. You want your kids do not diminish their freedom. "