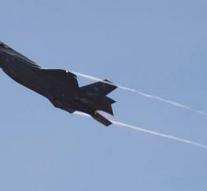 washington - The US Department of Defense has increased the cost estimation for the F-35, the Joint Strike Fighter, to $ 406.5 billion (EUR 356 billion). That is 27 billion dollars (over 23 billion euros) more than in the previous estimate, according to figures presented by the Pentagon on Monday to Congress.

The F-35 was already the most expensive weapon project in the history of the United States. A spokesman for the F-35 program did not respond to requests for an explanation yet. The increase in costs seems to be a part of additional production of aircraft for the US Air Force and Navy.

The JSF project has long been overloaded with cost overruns and technical delays. President Donald Trump has repeatedly stated to find the fighter plane of Lockheed-Martin too expensive. The Netherlands buys 37 JSFs, which have to replace the F-16's air force.