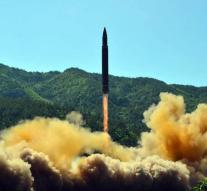 washington - The North-East Intercontinental Ballistic Missile (ICBM), launched on Tuesday, was a new type of rocket that 'we have not seen before'. That said a Pentagon spokeswoman on Wednesday. The ministry condemned the launch as escalating and destabilizing.

The US Department of Defense spokesman also said at a press conference that the rocket was fired from a mobile launcher.

The US Army also announced that it is able to defend the United States against the 'emerging' threat of North Korea's long-haul missiles. The Pentagon referred to a successful test last month when a US rocket drew a simulated incoming North Korean ICBM out of the air.