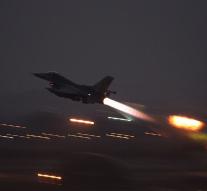 - By American bombing in Syria in the past month at least ten ISIS leaders killed. Several killed terrorist leaders would have had ties with the perpetrators of the attacks in Paris early November.

A spokesperson of the US Department of Defense announced during a press conference on the progress of Operation Inherently Resolve, the campaign of the US and allies such as the Netherlands aims of ISIS in Syria and Iraq attacks.

According to the spokesman is one of the bombed ISIS leaders Qader Abdul Hakim, the head of 'external operations' of Islamic State. He would have been in contact with the terrorist cell that was responsible for the Paris attacks. Other killed ISIS leaders would have had ties with the group around Abdelhamid Abaaoud.