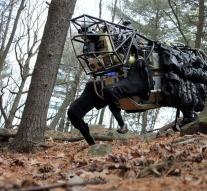 - The imposing dog-like robot LS3 is declared unfit for military service. The symbol of future warfare makes too much noise.


The LS3, also called AlphaDog, was shown in 2012 for the first time in the world. The mule-like robot capable of managing all types of terrain and can carry up to 180 kilos of cargo.
The robot with funds from the US military agency Darpa innovation developed by Boston Dynamics. This robot manufacturer was acquired in 2013 by Google. The Pentagon wanted to go into the robot during missions with marines.
After a lengthy test period LS3 seems to make too much noise. The Marines were happy that the robot meezeulde part of their 32-kilo material, but this benefit does not outweigh the restriction that the robot with all its noise betrays their position.
The Pentagon has invested around $ 42 million in the robot.
Boston Dynamics worked in recent years commissioned by Darpa also a quieter, electric-powered hydraulically actuated robot. This Spot robot dog can stabilize itself in unexpected circumstances, such as when he gets a kick. As can he LS3 in a variety of types of surfaces from the feet. Spot but is much smaller and can even carry some 18 kilos of material and that is not enough for the Marines. Additionally Spot is not autonomous enough.
Both the LS3 as Spot project are put on hold. The developers only say again to start development when they get a new contract from the Pentagon.
NEW