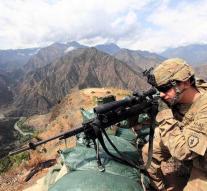 washington - The Pentagon confirmed Wednesday that there are already about 11,000 US military in Afghanistan, several thousands more than previously assumed. It is for the first time in years that Defense gives a more accurate picture of the number of men in the country.

The announcement came after the responsible minister Jim Mattis had expressed his frustration about the figures of American soldiers in conflict areas and said nothing about any expansion of the deployment. 'This is not an increase in unit holdings but is an attempt to be more transparent about the total size of the American armed forces there,' said spokeswoman Dana White.

The Pentagon said earlier that there were about 8400 American soldiers in Afghanistan, the limit imposed during the Obama administration. Trump recently announced that he wanted to send additional men for the fight against islamic terrorists, Mattis called a number of 4000. The US Army has been in Afghanistan since October 2001.