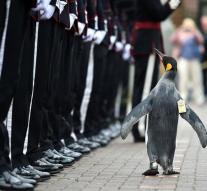 - A king penguin from the zoo in Edinburgh, Scotland has made it to brigadier general in the Norwegian army. The mascot of the bodyguard of the Norwegian king was promoted Monday, the BBC reports.

Hans Majestet Kongens Garde, as bodyguard is officially known, were adopted for the first time in 1972. The penguin Edinburgh's elite corps called him Nils Olav, the former Norwegian king and their commander. Each edition of the tattoo in Edinburgh that the Guard participates Nils Olav receives a line or star in. He is also elevated to the peerage by the British and must be addressed as 'Sir'.

The current Nils Olav is the third in a true dynasty.