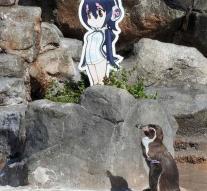 tokio - With the death of Grape-kun, an end to the 'relationship' between him and a cardboard version of Hululu's film figure. Probably, Grape-kun was the most famous penguin on earth.

The story sounds like a traditional Romeo and Julia with a touch of absurdism: when Grape-kun's penguin was left in a Japanese zoo by his wife because she could get a younger god, he soon fell in love with the image of a movie figure.

The romance depended on it: he stood up and opened his wings wide-open for hours for his love. That indicates a permanent relationship, the caregivers said. Grape-kun did not want to eat anymore at all. Careers had to remove the image.

Hululu is a figure from an animation film. She had arrived in the stay of the animals through an advertising stunt. Whether they are looking for a new love or being taken away is not clear.