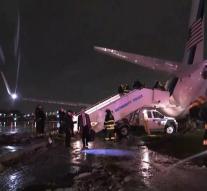 The plane hit during landing at LaGuardia Airport in New York job. There are reportedly no injuries.

A spokesman Donald Trump said the presidential candidate shortly after the incident phoned Pence. Adding that Trump ' is very relieved that everyone is safe aboard. '