Home / World / Pence calls Venezuela 'threat to the US' 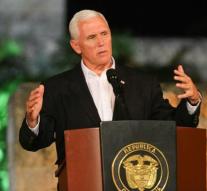 bogota - US Vice-President Mike Pence traveled hard to Venezuela during his visit to South America on Monday. He called the country 'a failed state which is a threat to the United States. But we will prevent Venezuela from slipping into a dictatorship. We will remove all economic and diplomatic power in order to restore democracy in the country. '

Pence, who visits a number of South American countries this week, told Sunday that 'the United States has confidence in a peaceful solution to the situation in Venezuela. '

Earlier this week, President Donald Trump spoke hard about the crisis in Venezuela. He said, among other things, that 'US military intervention in the country belongs to the potential. '