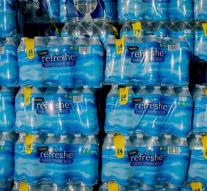 amsterdam - A woman who had taken 'too much' water over the Belgian border has been fined up to 414 euros.

The woman says she had taken water for the whole family. In France, bottled water is about half cheaper than in Belgium.

Normally there is free movement of goods within the European Union. There are limits for alcohol and tobacco, but this is not the case for non-alcoholic drinks and coffee. Everything depends on the interpretation, or the mood of the customs officer.

A customs officer tells the broadcaster RTBF: 'The quantity is clearly too large for one family. 'Customs sees it as a trade.

The woman from Houdeng is described in Belgian media as a retired woman, but Le Soir knows that she would have a little shop. Especially night shops in Belgium would earn a lot from the sale of water imported from France.