Home / World / Penalty for Germans to save with huge sausage 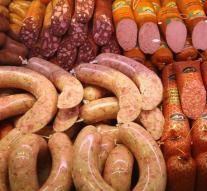 neubrandenburg - A 49-year-old German could face a fine after being in Neubrandenburg, in the northeast of the country has damaged a car with a bratwurst.

The man walked with his young son on the street when a motorist suddenly decided to park his car, German media report Tuesday. Father and son were unable to walk further, which the Germans into a rage. The two men were engaged in a heated discussion that ended in a scuffle.

The 49-year-old had just bought a sausage of about 30 centimeters long and figured that the only weapon that he had at hand. He hit the meat rod with such force against the car, there was a dent. According to the police was a metal clip at the end of the sausage, the cause of the damage.


Against two gamecocks under investigation. The man with the sausage hangs a fine overhead due to vandalism.