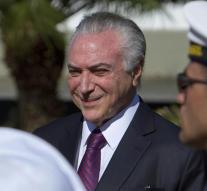 brasilia - According to a special court in 2014, Brazilian President Michel Temer has not guilty of illegal funding of his election campaign. The Friday ruling in Brasilia is a relief for Temer who should have resigned if he had been found guilty.

The prosecutors had argued that among others Temer got money for the campaign of building giant Odebrecht. Four of the seven judges of the special court did not regard that. With the verdict, Temer is not over yet. There is also a federal investigation against him because of corruption, money laundering and barrier to justice.

The center-right Temer participated in the presidential elections in 2014 as vice president next to the left-wing Dilma Rousseff. She was re-elected, but in 2016 she was taken out of office in a controversial procedure.