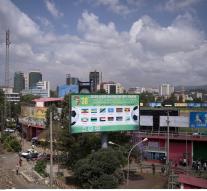 - An American is killed when his car on the outskirts of the capital Addis Ababa on people encountered who threw stones. The US Embassy in Addis reported this Wednesday. The cause is not yet clear, but the man died Tuesday.

In many parts of Ethiopia, it has long been troubled by discontent among the largest groups, the Oromo and the Amhara, the authoritarian regime. Addis Ababa is surrounded by the Oromia region.

In this region, a Dutch farm Tuesday was attacked by youths. Last month, there are foreign flower and plant nurseries attacked and destroyed, including Dutch property.

The Oromo and Amhara are disadvantaged in their own words, and excluded from influential positions. Which are nearly a quarter century mostly filled by members of the minority from the northern Tigray.