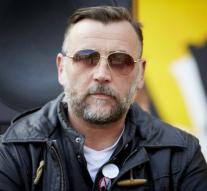 dresden - Lutz Bachmann, leader of German protest movement Pegida, on Monday announced the establishment of its long-awaited party. He told the weekly newsletter of his islamo- and xenophobic alliance that has already been signed on 13 June, the founding treaty of the 'freedom-Ready People's Democratic Party (FDDV).

The newcomer on the political scene is inter alia a reaction to an impending ban Pegida. How the statutes look like and who are the co-founders, Bachmann did not tell. The details in the coming days will be brought out.

The foreman began a year ago, on the development of a parliamentary,, branch 'of Pegida. The FDDV does not compete with Alternative for Germany.,, We will support the AfD in the next Bundestag election and only set very few districts or constituencies themselves candidates. ''


Pegida has a good relationship with the AfD in most German states. Only the Saxons department is the frosty relationship.,, But in other regions will be understood that it is only possible by working together ', 'Bachmann said. He will have no function itself in the new party. FDDV and Pegia will operate strictly separated.,, I stay on the street Lutz Pegida. ''