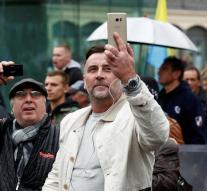 dresden - The condemnation of Pegida-founder Lutz Bachmann because 'volksopruiing 'Wednesday become final. Both his own attorney as prosecutor decided to drop their appeal against the judgment of the court. The judge sentenced Bachmann for his snide remarks about refugees to a fine of 9600 euros.

Bachmann said asylum seekers on Facebook include animals, garbage and a 'filthy mess. 'That he has under law exceeded the limits of freedom of expression. At first instance, the prosecution had demanded a prison sentence. The defense demanded acquittal. But both sides decided to choose eggs for their money when a higher court in Dresden proposed to close the case.

The leader of the Pegida as the movement's full name, himself was not present in court. He lives in Tenerife.