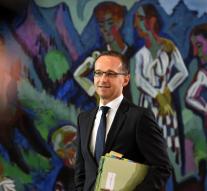 According to estimates showed around 8000 people responded to the call for the meeting. At the same time hundreds of people marched to the nearby post office against hate and smear campaign and for openness to the world. Police were four hundred to five hundred local agents and kept both groups at bay.

The SPD reacted indignantly to the Meuse- Goebbels comparison. The Social Democratic Party is demanding an investigation against Pegida chief Bachmann.