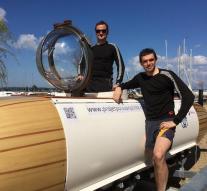 - Two French engineers Friday began their attempt to stabbing across the Channel in a mini-submarine, which is driven by the power of the two occupants themselves.

Antoine Delafargue (33) and Michael de Lagarde (36) intend to make 135 nautical miles (250 kilometers) between Plymouth and Saint-Malo in seven days. They left the port city in southwestern England Friday behind a speed of three kilometers per hour. It is intended that the two changes every four hours in place and will turns sleeping while flying at 100 meters below the surface towards the Brittany coast.


Their journey can be followed via http: // www. projetpoissonpilote. com / en /

The 3500 kilo and 6 meter long vessel has been designed by two French themselves, and have both the front and the back in a few pedals. Delafargue that the attempt,, a childhood dream come true '' called, and the Lagarde had two years required for the construction, at a cost of nearly 120. 000.

They will also film the seabed to contribute to knowledge about renewable energy and the underwater world.