Home / World / Pechtold: This was a productive day 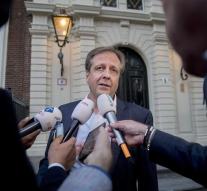 the hague - The negotiators of VVD, CDA, D66 and ChristenUnie started a formal consultation on Monday before going on holiday for two weeks on Monday. They immediately held a marathon session of eleven o'clock. None of the negotiators wanted to say a lot about the progress on the road to a Rutte-III cabinet after the end of Monday evening.

'This was a productive day,' said D66 leader Alexander Pechtold. At the end of last week he was retarded. He then said that centimeters were made, no meters.

The conversations go on Tuesday, again in the monumental Johan de Witthuis, a few hundred meters from the Binnenhof.