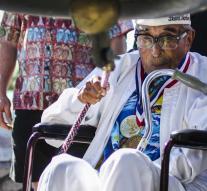 washington - Ray Chavez, the oldest veteran who survived the attack on Pearl Harbor, died at the age of 106. Chavez died in his sleep in his hometown of San Diego, his family announced.

Chavez was born in 1912 in San Bernardino in California. He served in the army on a minesweeper and a transport ship 77 years ago. He was stationed at the Pearl Harbor naval base during the attack of the Japanese on 7 December 1941.