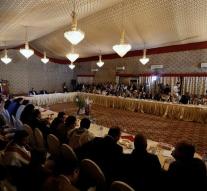 sanaa - Talks have been suspended on ending the war in Yemen. This said the envoy of the United Nations Yemen Saturday.

According to UN mediator Ould Sheikh Ahmed, the consultations did not fail.,, There is a basis on which we can continue. '' The negotiations are aimed at ending a sixteen-month conflict between the internationally recognized government of President Abed Rabbo Mansur Hadi and Shiite Houthi rebels. According to international aid organizations were killed by the struggle definitely 6500 citizens.

The UN reported last week that the Shiite rebels, the troops of the Yemeni government and pro-government coalition of Sunni Gulf states are guilty of wrongdoing. The Houthi rebels use civilians as human shields and Saudi Arabia and its allies have bombed civilian homes among others, according to a confidential UN report.