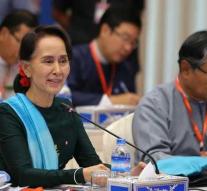 dhaka - Three women who have been awarded the Nobel Peace Prize have criticized the Myanmar leader Aung San Suu Kyi. The Iranian Shirin Ebadi, Máiread Maguire from Northern Ireland and the Yemeni Tawakkul Karman demand an end to the human rights violations against the Rohingya minority in Myanmar.

The women gave a press conference in Dhaka after they had visited refugee camps in Bangladesh, the neighbor of Myanmar. Karman said that the Myanmar leader, who was also awarded the prestigious peace prize herself, is no longer allowed to close her eyes for the persecution of the Rohingya. 'Otherwise it risks being complicit in the crimes. '

Maguire said he had heard stories about rape and murder. 'This is a genocide. We can not stay silent, 'said the activist. 'Silence comes down to complicity. 'The Peace Prize laureates called for those who are responsible for human rights violations to be prosecuted by the international criminal court.

According to Karman, the laureates also plan to visit Myanmar. They would have sent several messages to Suu Kyi, but received no response.