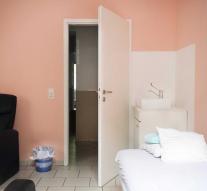 brought - Police in Germany and the Netherlands has ingested a total of 26 reports of patients who have been treated lately Brought into the controversial cancer treatment clinic, near the border of Limburg.

meanwhile the gezondheiszorg Inspectorate filed against Ross. According to the Inspectorate has critically ill patients treated incorrectly, and moreover, failed to alert a doctor when they were in bad shape. The license of the naturopath should be repealed, says the CAA. Pending the investigation Klaus Ross must cease its activities.