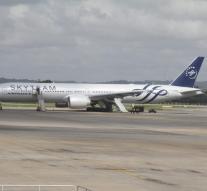 - Two passengers of the Air France plane that Sunday had to make an emergency landing in Kenya because of the discovery of a fake bomb Monday morning after his return in custody in Paris. This was reported by the French newspaper Le Parisien.

The aircraft was en route from Mauritius to Paris with 459 passengers and crew on board fourteen. The aircraft made an emergency landing in the Kenyan city of Mombasa, after a suspicious object was found in the toilet. The Aviation Authorities initially reported that it was a bomb, but it turned out to be an object among other cardboard and paper.

The two were arrested by the border police and detained for seven hours, said a police source. One of those arrested were a former police officer from Reunion.