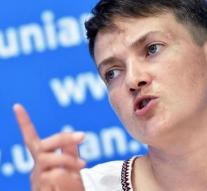 kiev - Ukrainian Motherland Party has put its former topkandidate Nadezhda Savtsjenko from the group. Following is an encounter she had with leaders of the pro-Moscow separatists.

'The Fatherland Party is categorically opposed to negotiating with terrorists, against amnesty for killers of Ukrainians against legalization of the gangs in the Donbas,' left the party of former Prime Minister Yulia Tymoshenko know.

Savtsjenko recently spoke in the Belarusian capital Minsk with the Ukrainian rebel leaders Aleksandr Sachartsjenko and Igor Plotnizki about a prisoner exchange. The 35-year-old former pilot Savtsjenko came in May itself released from Russian captivity in exchange for two Russians.

Tymoshenko's party took in the elections in 2014 but just the threshold of 5 percent. That was due in large part to the publicity Savtsjenko generate knew.