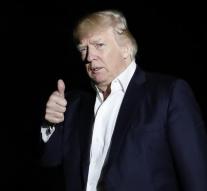 washington - US senator Lindsey Graham is going to investigate President Trump. He wants to know if the President's business interests can be linked with Russia, CNN reports Tuesday.

The Republican Graham is a party's party of the president. He also said he would like to have access to Trump's tax returns. In the run-up to the presidential elections last year, the President had promised to make these declarations public, but has not done so so far.

On the question of whether Graham wants to get the tax documents through a court order, the senator did not want to answer.