Home / World / Party Gruevski in the lead in Macedonia 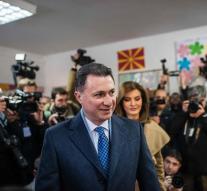 skopje - The preliminary results of the parliamentary elections in Macedonia was the party of former Prime Minister Nikola Gruevski on Sunday in the lead. After about a third of the votes counted, the VMRO-DPMNE was at 41 percent. The Social Democratic SDSM leader Zoran Zaev of opposition was 36 percent.

The early and twice postponed elections are seen as the most important of the past twenty years. The elections were held under strong pressure from the United States and European Union to put an end to a crippling political crisis in the former Yugoslav republic.

The opposition accused the camp of Gruevski on the basis of telephone tapping of large-scale corruption and crime. Gruevski pointed any involvement of the hand, but according to a special prosecutor appointed by him were some of the accusations grounded in his address.