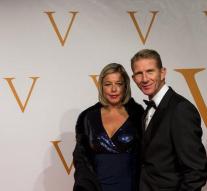 the hague - Melissa Good, the partner of former state secretary Jack de Vries, has passed away. She died Saturday due to the effects of cerebral hemorrhage.

The 38-year-old Melissa was the registered partner of CDA's De Vries. She had become a mother of their daughter Elisa in March 2015. On September 19, Melissa suddenly suffered from cerebral hemorrhage. That caused so much damage that she could not survive.

The cremation will take place in a closed circle, in the mourning ad De Vries will place with his neighbors. The family tells us that the death is unexpected, unreal and unimaginable.

Since then, he and Melissa have been very happy together and, among other things, decided to enter into a registered partnership.