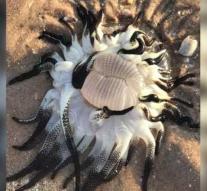 broome - A mother and daughter have made a special discovery on a beach in the Australian Broome. They post photos of 'a creature' on social media, after which there was heated speculation about the nature...

One was groping in the dark, the other suspected an alien. But the correct answer also came, it would be a sea anemone that was washed up on the beach. 'That black and white color probably indicates disease or death. In life that anemone will have had a different color '', according to a connoisseur.

Sea anemones are cavities that often attach themselves to stones, plants or other objects in the water. A sting of an anemone can be dangerous.